Zuzana Prochazka has cruised, chartered and captained in most areas of the world. Here, she reports on her cruise around the Greek Islands, namely Milos Island, a Greek gem set deep in the Mediterranean.

A Delayed Start Stuck At Mykonos

If you’ve ever moored a boat in 35 knots, you know what a treat a howling Meltemi wind can be. As if it’s not hard enough to wiggle your transom into a gap that you’d swear is half the required space, this wicked Greek northerly added to the fun of our arrival at the glitzy Greek island of Mykonos. Three days later, we were still there; our anchor stuck on a submerged cable in the tiny marina. 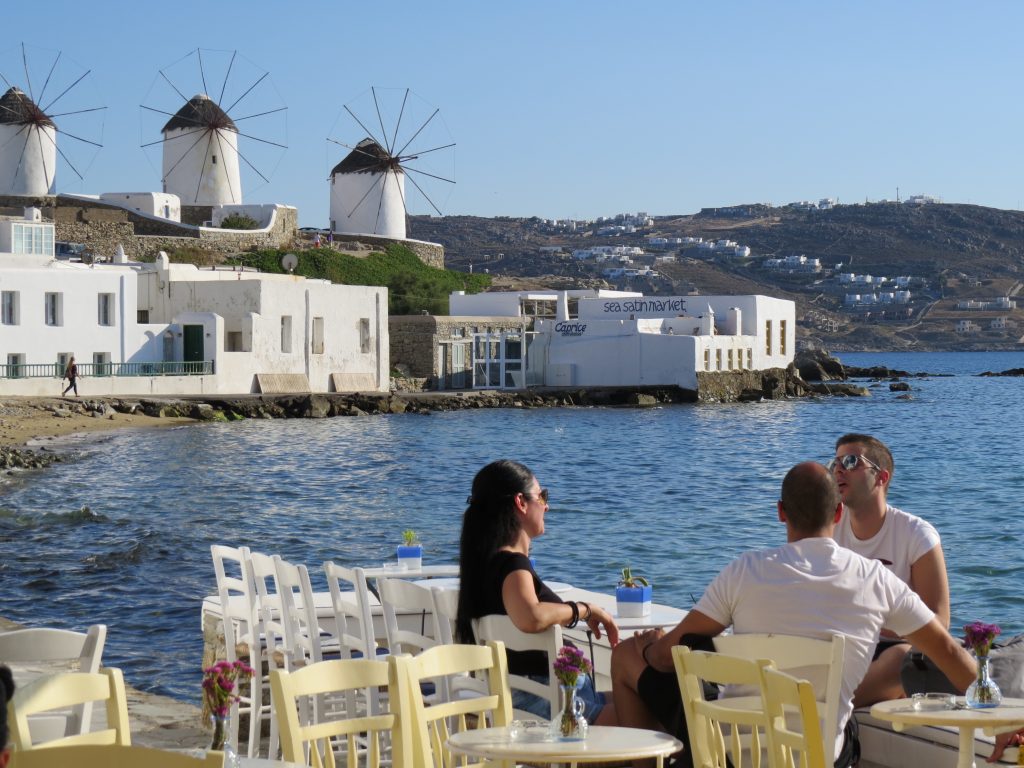 It wasn’t the worst place to sit out the nasty wind as we continued our tour of the Cyclades Islands that jut out into the Aegean Sea south of Athens. Mykonos, where beautiful people come to eat, drink and generally misbehave, has much to offer, but once we were free of the cable and the wind, we made tracks south to the much quieter island of Milos.

We sailed towards Milos on a healthy beam breeze and arrived in time to get a space on the quay in Adamas harbor where the sun was shining. Milos or Melos is a quiet volcanic Greek island in the Aegean Sea, just north of the Sea of Crete. Milos is the island where a farmer unearthed the famous Venus de Milo (the greek statue) in 1820. She may have even had her arms back then. There is a debate about how she lost them – probably in a scuffle regarding ownership between the French and the Turks. Today, Venus is housed at the Louvre in Paris, so at least we know who won.

We tied up in time to take a stroll before dinner. Every evening, the circular town quay is lined with vendors, some looking like Zorba the Greek, hawking excursions to honeymooning hotel dwellers and promising unforgettable tours of the southern and western sides of the island, which are chock full of caves and cliffs. We walked from one handsome sunburned salesman to the next, eyeing their vessels and learning about the must-see sites, while each assured us that his tour was better than his neighbor’s.

The Greeks have a bit of a flirtation with vessel capacity limits, and owners of 45-foot sailboats were promising full-day tours “with plenty of room for at least 18 people.” We were seven in 56 feet, and that was enough. The highlight of every vendor’s Oscar-worthy presentation was a photo of the amazing lunch that would be served along the way.

The more I listened, the more I realized that we could do this tour on our own. Sure, we didn’t know whether we would be able to anchor at each site or if there were private vessel restrictions, but we would give it a try. I collected their brochures and, over dinner, mapped out our excursion.

The following morning, we waited two hours after all the boats departed and then followed in their general direction, west and south. With the delay, we arrived at each site just as the commercial boats, packed with honeymooning couples from local hotels, were leaving for the next place, so we had each cave, anchorage and lagoon to ourselves. 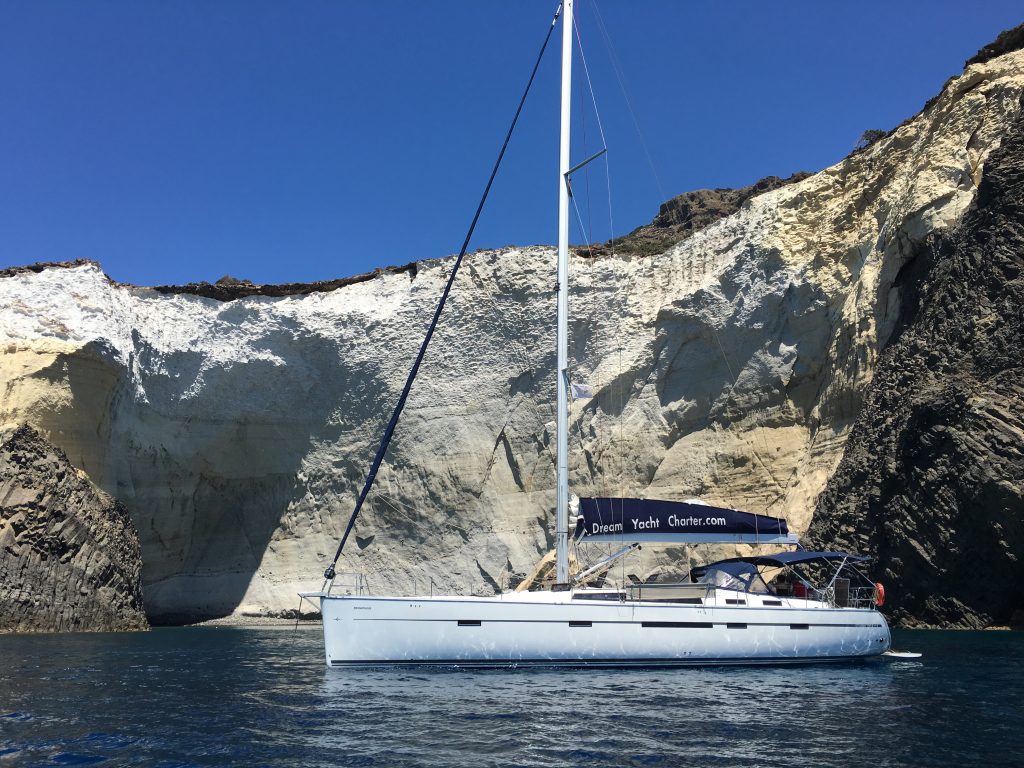 The first stop was Sikia, a cave rendered topless when its circular roof caved in a few centuries ago. The pool of crystal water within, lit by rays of sunlight streaming in through the hole above, was ours alone. Moments prior, the place was packed full with squealing tourists, so our lone dinghy ride inside was positively sublime. It was just us and our echo for company.

And lunch? Well, we put together our own. It was more than amazing since I ran out and bought bread, olives, cheeses, meats, pastries and wine that morning. It was so delicious that a photo of it would have given any of the Zorbas on the dock a run for their money. 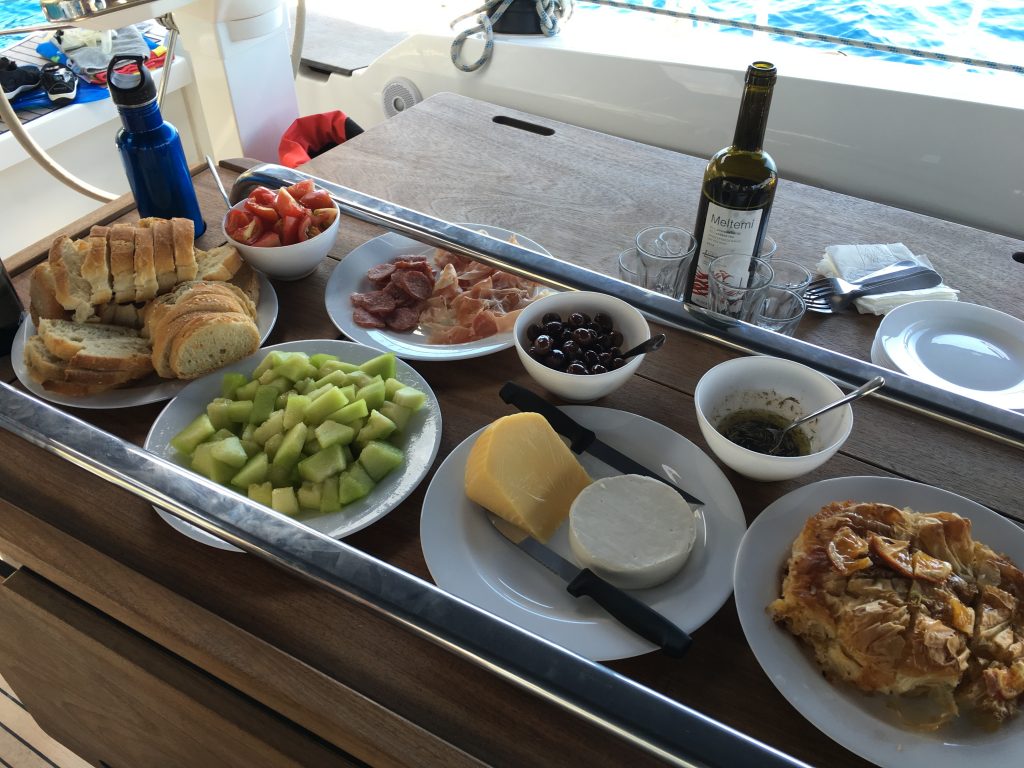 A feast fit for a king. Image credit: Zuzana Prochazka 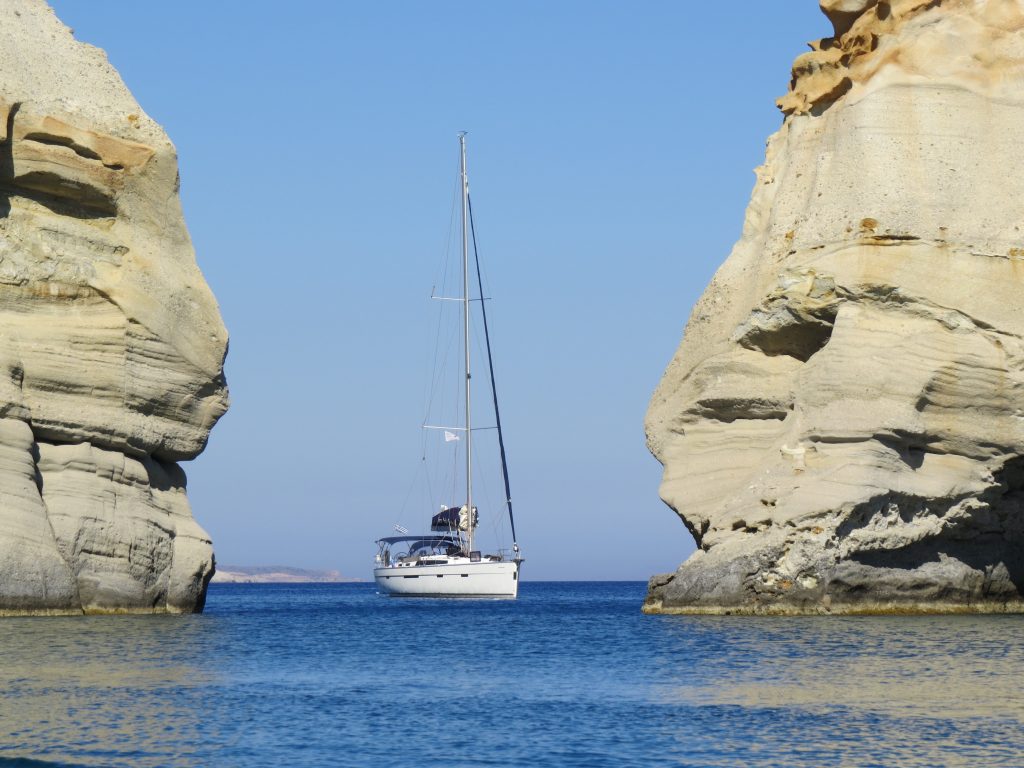 Having gorged ourselves, we raised anchor and followed the breadcrumb path of our guides, south to Kleftiko. This southern tip of the island is like a movie set of what you may imagine a Greek island anchorage should be. It’s a large cove with arches, rock formations and caves you can swim or kayak around. The best part of the afternoon was spent dingying inside the nooks and crannies, shooting video and taking hundreds of pictures. There wasn’t a wrong place to point the camera. 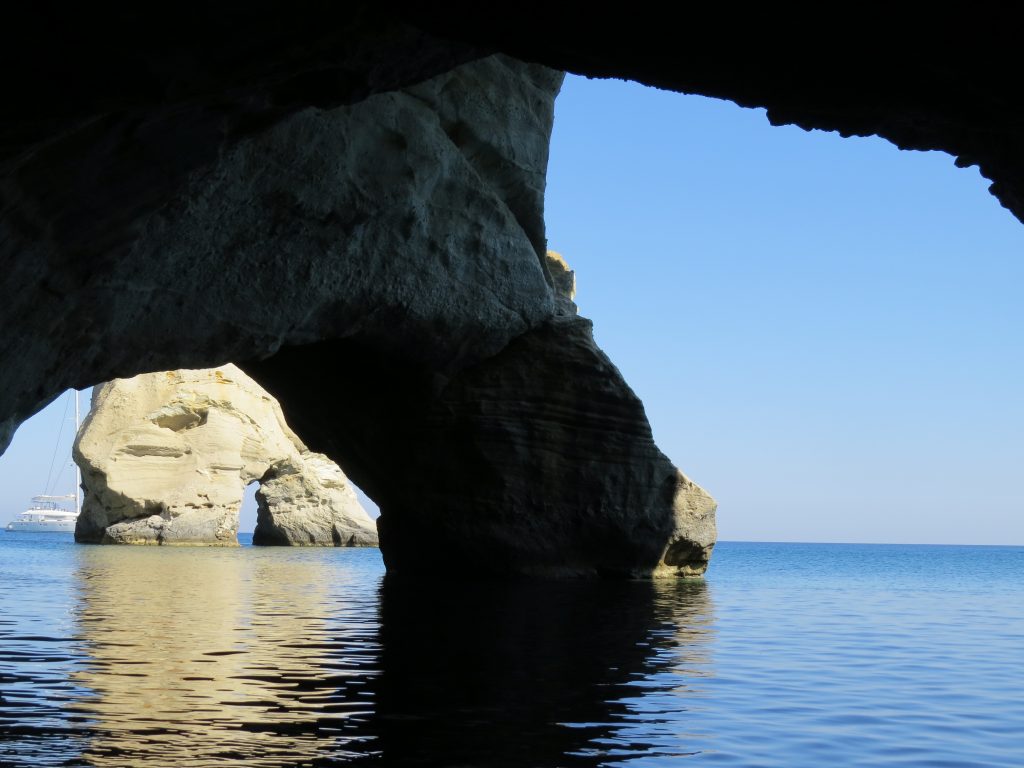 We completely lost track of time and suddenly noticed that the tourist boats had all headed back to Adamas to dispatch their guests and hunt for new ones during the evening pitch on the quay. Once again, we had the upper hand. We didn’t need to return that day. Because Kleftiko can only be accessed by boat, we were nearly alone by sunset, so we let out more chain and made ourselves comfortable for a quiet night at anchor. Protected from the northerly wind by the steep white cliffs, the night was calm with no one near and only the stars above to puncture the darkness.

The wind was in the process of shifting directions from a northerly to a southerly, so the next day, with a slight breeze, we motored east and then north to complete our circumnavigation of the island. On the northern side, we headed offshore a bit to check out Glaronissia. In this geological phenomenon, three islets were formed under such tremendous pressure that they are entirely made of hexagonal rock tubes. The islands look textured, with the vertical brown tubes stabbing down into the surrounding blue water.

We circled the rocks with no place to anchor and then headed over to the beach at Sarakiniko, one of the most photographed spots in Greece. Sheer white cliffs fall into the blue-green water, where pink caves dot the edges. We had a unique vantage point of the shore from our deck, and that’s when we noticed all the cameras pointing our way. We were one of the very few boats anchored out, and that made us the much-envied focus of the rest of the visitors who had arrived by tourist bus from Adamas. 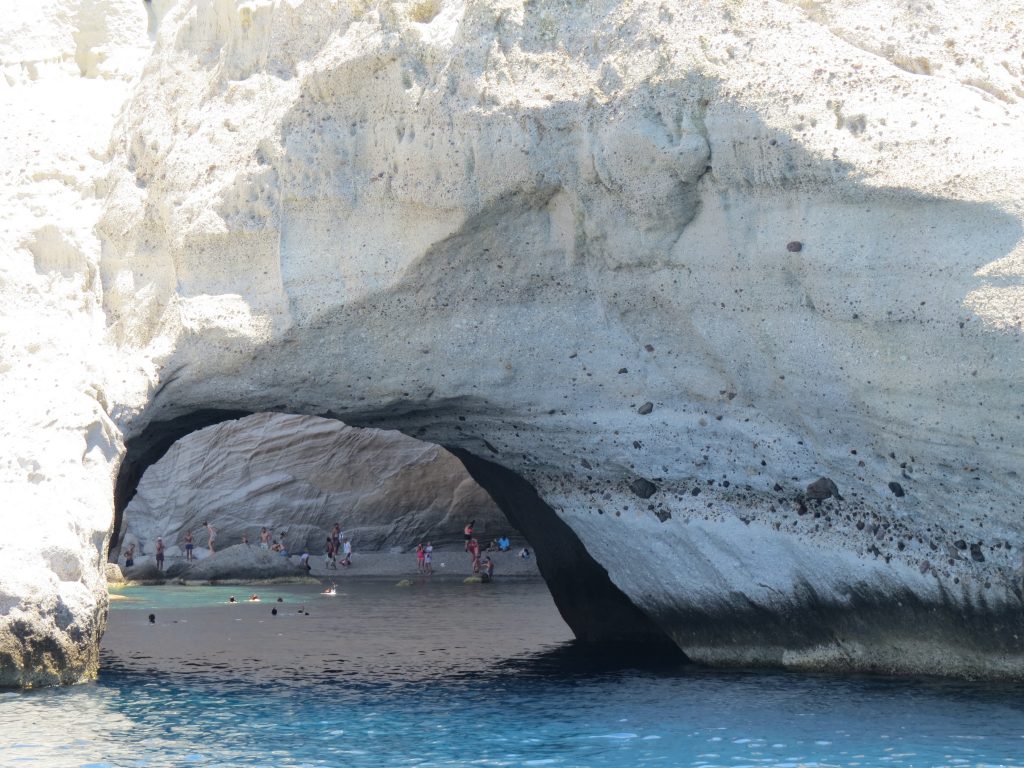 Made up of white and grey sand, tall cliffs, and hundreds of caves, the moonscape of Sarakiniko is a spectacle. Add the rusting hulk of a sunken ship, and it’s a snorkeler’s paradise. Young guys and gals were daring each other to jump off the 50-foot cliffs above. I opted instead for a long swim along the shoreline, wondering if Odysseus himself, might have been lured here by sirens. 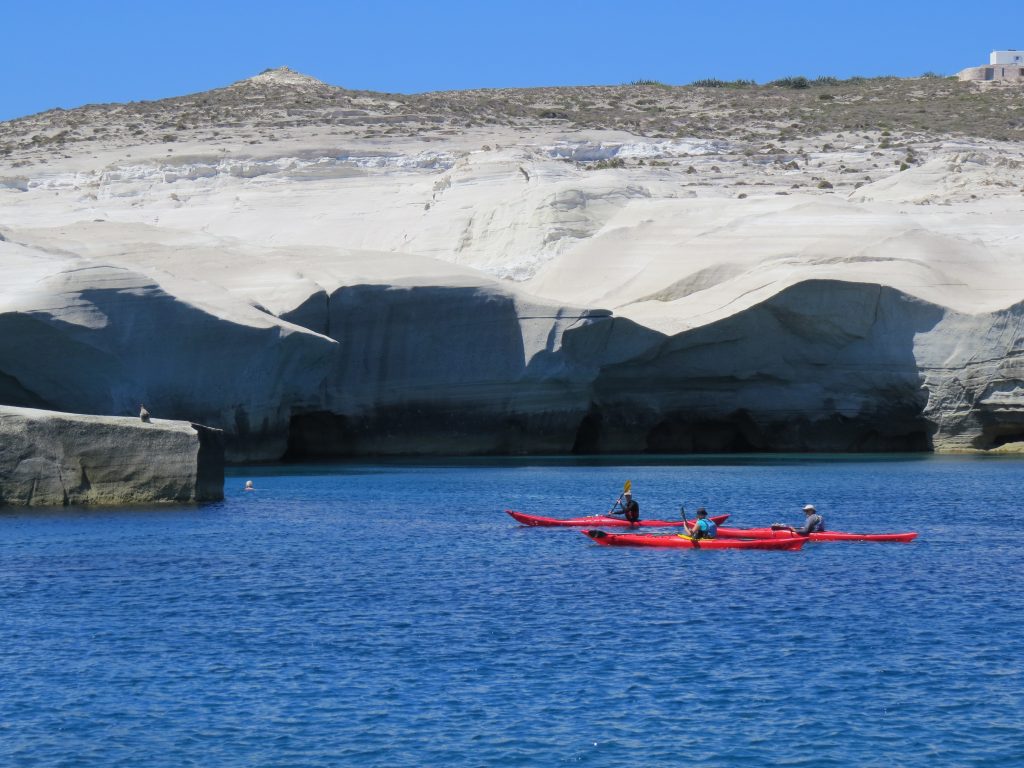 Sarakiniko would have made another starry anchorage, but we didn’t trust the night’s forecast, so we headed back around to Adamas and found one last space on the quay for another Med moor, this one executed in windless bliss. With a few hours of daylight left, we rented a car and visited the interior of Milos.

Every island in Greece has an old town called “Plaka” and Milos is no exception. This one was perched up on the western slope, full of narrow streets with tavernas shoehorned into every whitewashed corner. Tucked way down below at sea level, Klima’s fishing village is the definition of a Greek seaside settlement. Painted every color found in a Greek Home Depot, the buildings huddle on the banks, lapped by waves with the fishing skiffs riding out the breeze on their moorings. 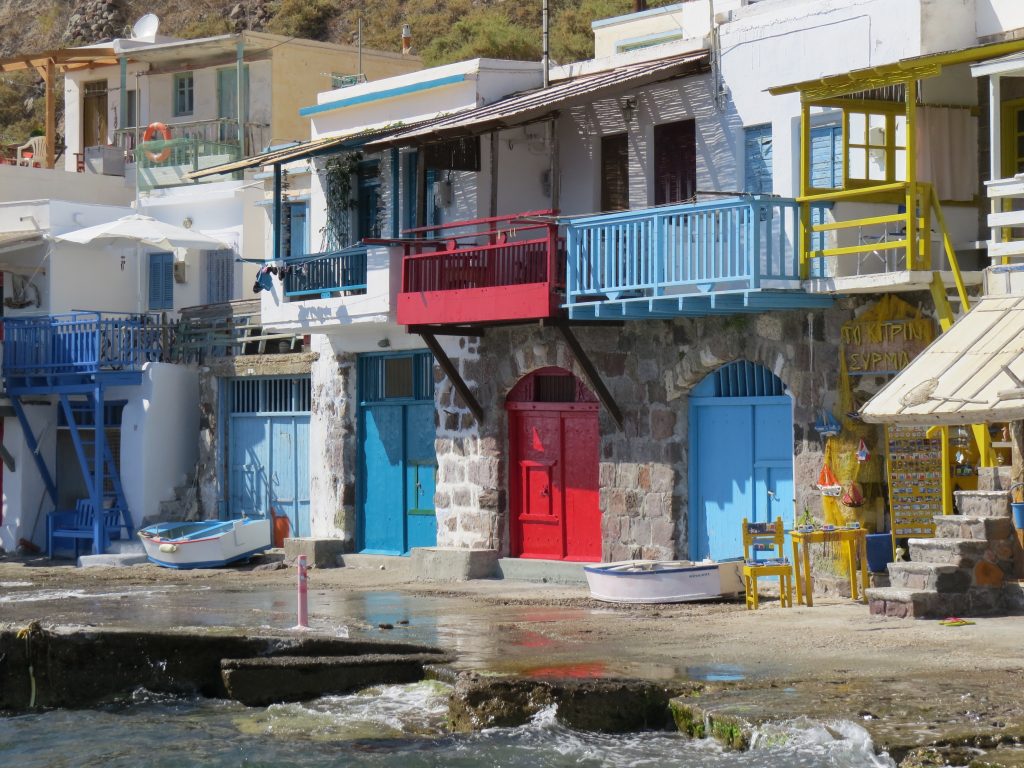 Halfway between Plaka and Klima, we found ancient catacombs and an amphitheater with impressive bas-reliefs (from Roman times). It’s kind of eerie to stand in the heart of such mind-bending history with nearly no one around. It’s like a forgotten museum in a Greek field. If it were in any major metropolis, it would have guards and an entry fee.

Trekking across the island, we also found the tiny village of Pollonia from which you can almost see Glaronissia. Wherever there’s a square meter of space, Greeks put down a table and chairs, thereby creating impromptu tavernas, and there were at least four crammed onto Pollonia’s little waterfront, so we stopped in for a Mythos beer.

We stumbled across the Kostantakis winery a short distance away and were invited inside for a wine tasting. Milos is an arid island but somehow manages to have impressive vineyards. The scenery is less like that of the lush Napa Valley and more akin to central California’s drier rolling hills. Sipping a white wine on a bench, we had views that could have been stolen from the oenophile movie, ‘Sideways’.

We rolled back to town that evening in time to make preparations for departure the next day. It was time to head back toward Athens, but now, the wind gods were with us, and we were pushed north. Milos was only one of the many islands rich in history where we tied up. The breathtaking scenery in Milos will forever be etched in my memory. 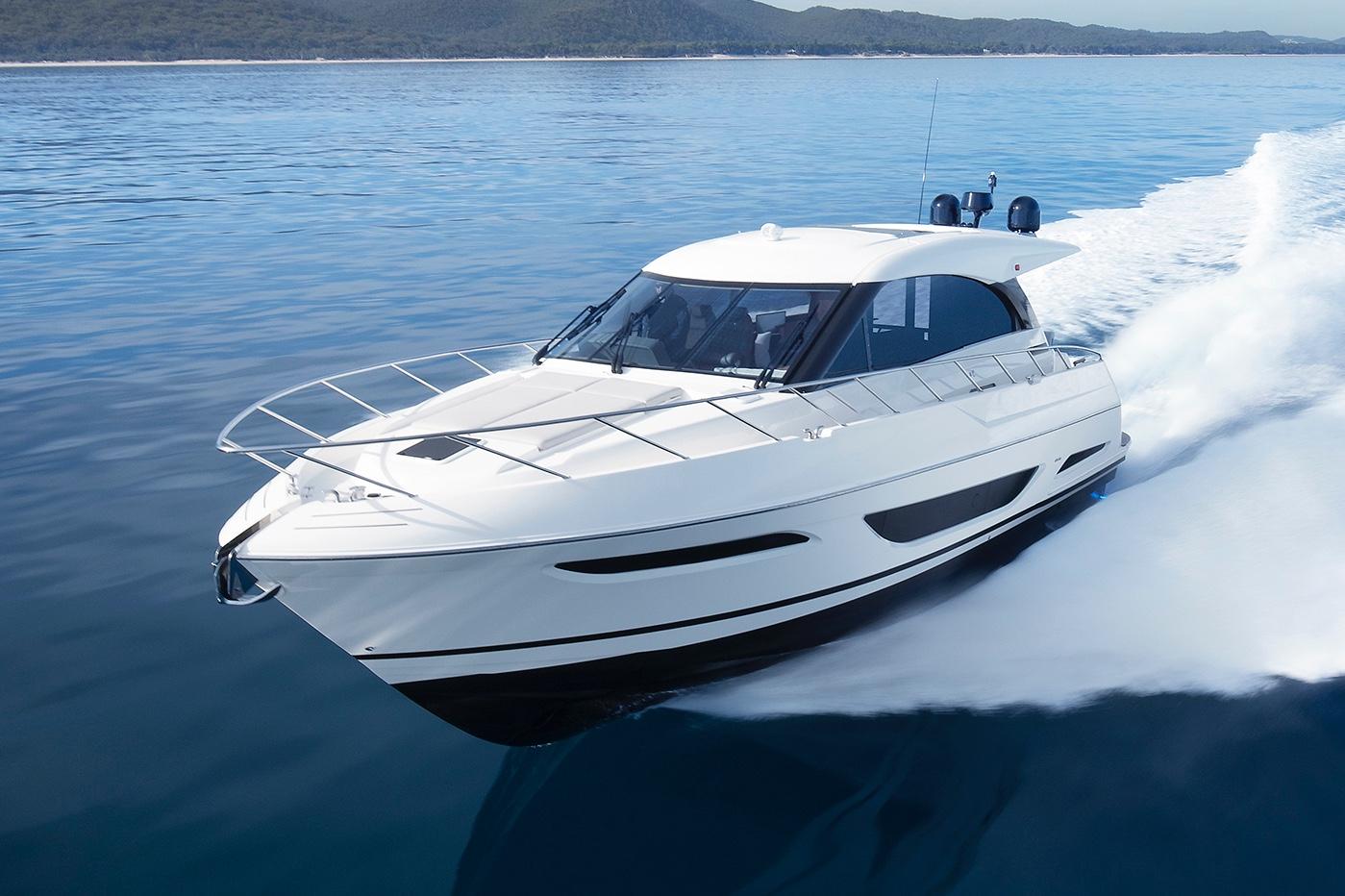 A deep dive into all the different types of yachts, from pocket yachts to superyachts and everything... 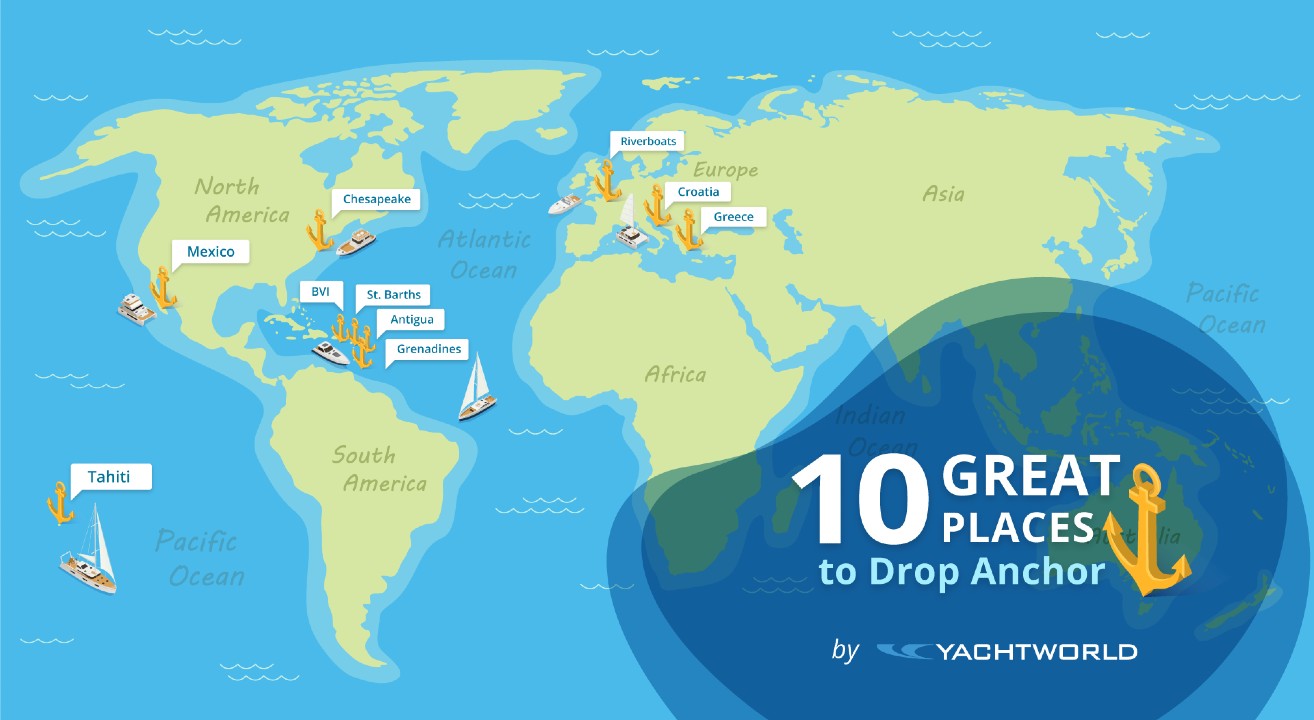 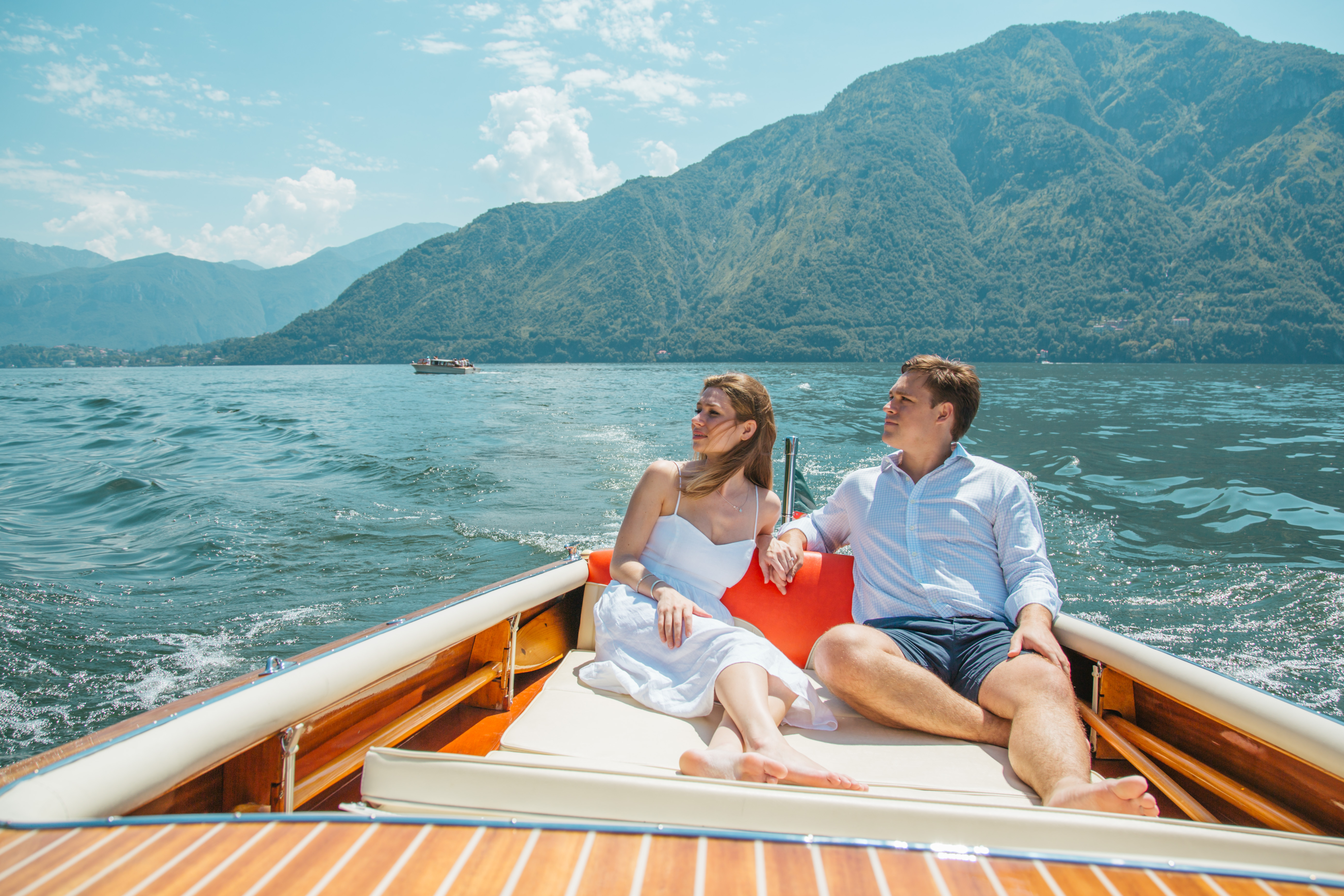 Emma Coady provides her insights on classic boat glamour. Find out more about how to value a classic...